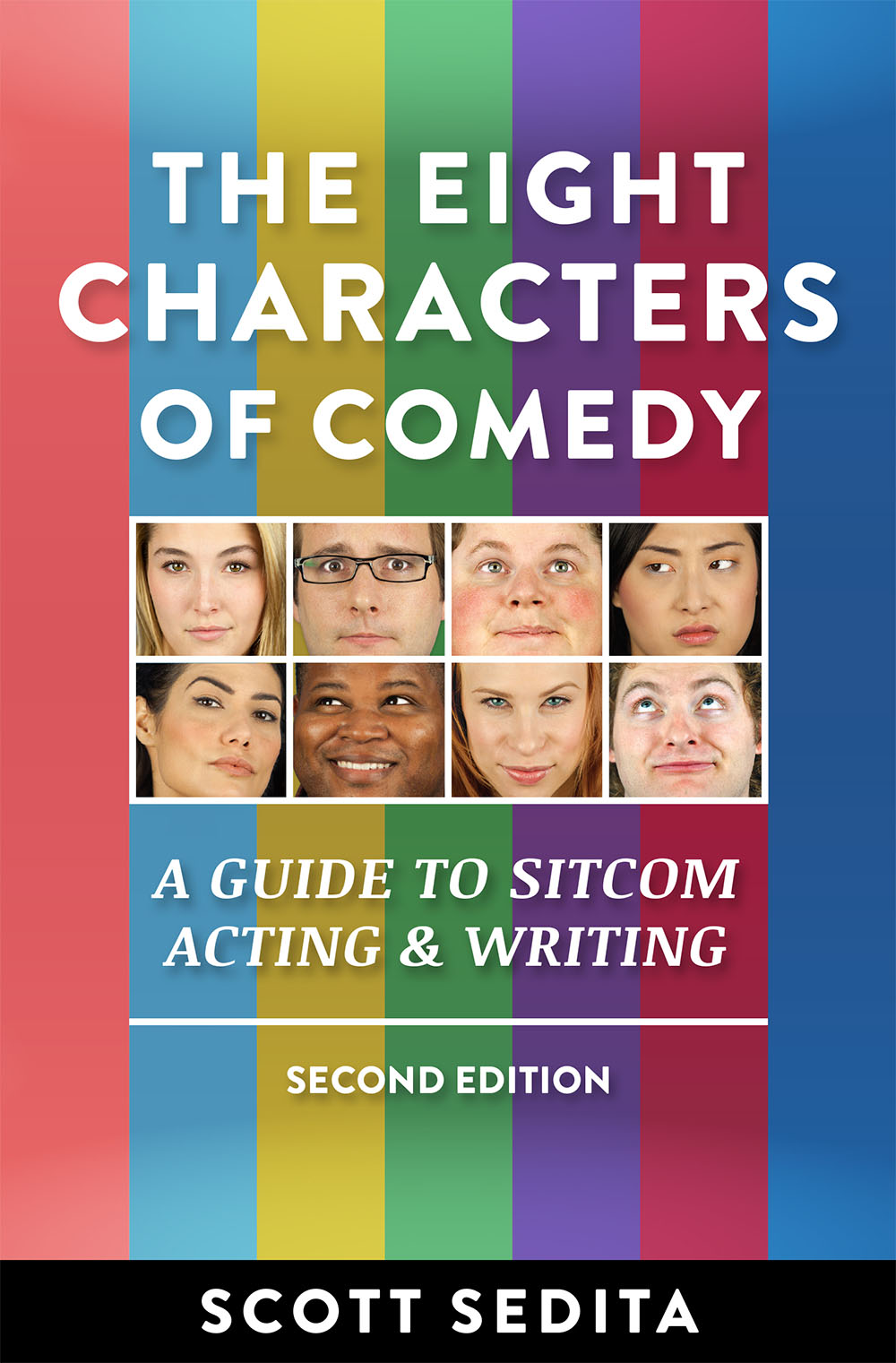 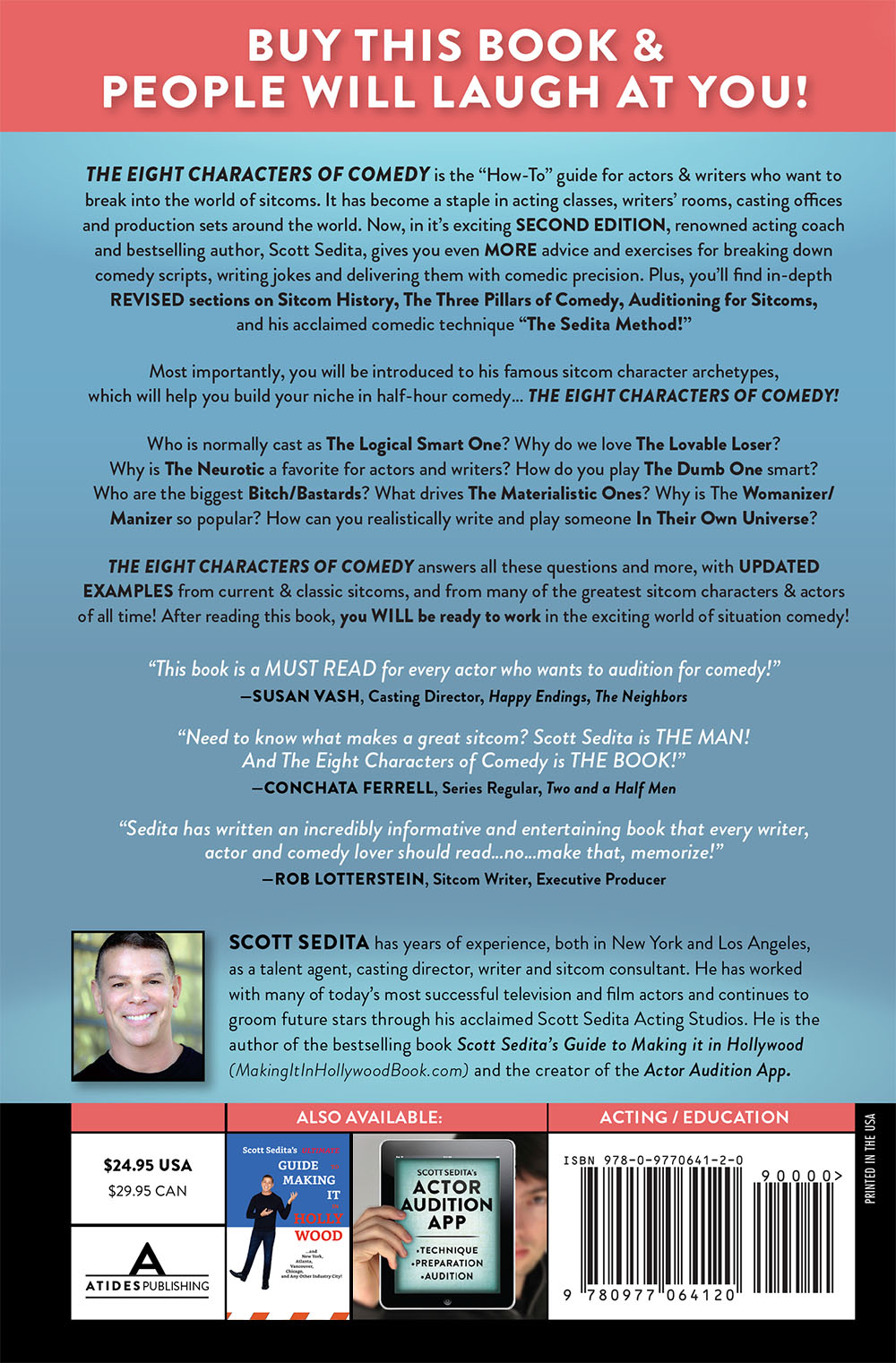 The next time you want to bring on the funny, remember to have your Comedic Toolbox with you! Here is an excerpt from Scott Sedita’s best-selling book, The Eight Characters of Comedy: A Guide to Sitcom Acting and Writing, explaining the tools you’ll need:

Sarcasm – In sitcoms, sarcasm is the most commonly used method to create humor. It’s defined by Webster’s Dictionary, as “a cruelly humorous statement or remark made with the intention of injuring the self-respect of the person to whom it is addressed, usually by drawing attention to one of his weaknesses and often associated with irony.” In the sitcom world, good sarcasm is comedic gold. That’s why some of the most famous sitcom stars use this tool—to ridicule, to mock, to put people in their place, or even to make fun of themselves. Watch Audrey Meadows, Jerry Seinfeld, Roseanne Barr and Matthew Perry, respectively.

Verbal Jokes – Beyond Key Words, Operative Words/Phrases and Catch Phrases, there are other tricks comedy writers use to make verbal jokes, including alliteration, puns, words that are difficult to say, double entendre, and funny-sounding words (like “Vitameatavegemin.” Also, verbal jokes are derived from foreign languages, words that are mispronounced and misused (malaprops). Watch Bronson Pinchot as Balki, Sophia Vergara as Gloria and Carroll O’Connor as Archie, respectively.

The Spit Take – A Spit Take occurs when a character takes a drink just as they hear something outrageous, causing them to “spit” out the liquid in an exaggerated way. Watch John Ritter or Michael Richards.

Double Take – A Double Take occurs when a character looks at something he sees (or hears), doesn’t process it, so he looks away, only to whip his head back to see it for what it really is. “Did you just say what I think you said?” OR “Did I just see what I think I saw?” Watch Jon Cryer on Two and a Half Men, or any of the actors playing “mortals” on Bewitched.

Slow Burn – A Slow Burn often appears immediately after a Patient Stare and before the sarcastic retort. A Slow Burn occurs when a character hears another character say something ridiculous and s-l-o-w-l-y turns their head, giving an incredulous look that says to that character “Are you kidding me?” Watch Bea Arthur on both Maude and The Golden Girls.

Pratfall – A Pratfall occurs when a character stumbles over a piece of furniture, slips on a banana peel, falls off a ladder, or trips on their own two feet (to name a few). Watch The Dick Van Dyke Show, F Troop and Modern Family.

Sight Gags – A Sight Gag occurs when a physical object in a scene becomes part of the humor, like something blowing up, something breaking, or something catching on fire. Or it occurs when a character can only rely on non-verbal physical actions and reactions to something happening in a scene: making a shocked face, wild arm movements, the sign of the cross, a slash-the-throat gesture, a dagger in the heart, a happy dance, etc. Watch I Love Lucy, Frasier and Will & Grace.

CELEBRATING 25 YEARS!
SUBSCRIBE TO OUR NEWSLETTER
Be the first to get the latest updates and exclusive content from Scott Sedita Acting Studios!
Give it a try, you can unsubscribe anytime.